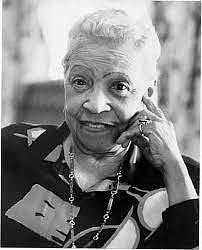 "Mine is a quiet exploration—a quest for new meanings in color, texture and design. Even though I sometimes portray scenes of poor and struggling people, it is a great joy to paint." — Lois Mailou Jones quoted in Samella S. Lewis and Ruth G.Waddy, Black Artists on Art (Los Angeles: Contemporary Crafts Publishers, 1969), 1:97.

For more than fifty years, Lois Mailou Jones has enjoyed a consistently successful career as a painter, teacher, book illustrator, and textile designer. Her art spans three continents: North America, Europe, and Africa, and she has been represented in more than seventy group shows and mounted twenty one-woman exhibitions since 1937.

Jones was born in Boston in 1905, the second of two children of Thomas Vreeland and Caroline Dorinda Jones. Jones’s father was the first African American to graduate from Boston’s Suffolk Law School, and her mother was a beautician. Jones has recalled that her mother fostered her earliest artistic interests and that her teachers in the Boston public schools were encouraging. Jones’s initial professional aspirations were to pursue a career in social work. It was, however, the offer of a scholarship for the vocational drawing classes at the Boston Museum School of Fine Arts that spurred Jones to a permanent career in art. Initially for one year, her scholarship was extended to six years, based on Jones’s outstanding achievements, and when she graduated in 1927 she was also awarded a teacher’s certificate. She has received diplomas from the Boston Normal Art School and Designer’s School in Boston. She has also studied art at Harvard University and Columbia University.

Jones’s first experience with racial prejudice occurred in 1927 when she applied for a graduate assistantship at the Boston Museum School of Fine Arts. Her application was flatly rejected and she was advised to travel to the South and help African Americans living there. After briefly considering moving to New York City, Jones was recruited in 1928 by Palmer Memorial Institute, a private African-American boarding school in Sedalia, North Carolina, to head its art department. After two years in North Carolina where she experienced the frustrations and indignities of segregation first-hand, Jones left Palmer Memorial and joined the faculty of the Fine Arts Department at Howard University in Washington, D.C. She remained at Howard as professor of design and watercolor painting for forty-seven years until her retirement in 1977Jones’s long career may be divided into four phases: the African-inspired works of the early 1930s, French landscapes, cityscapes, and figure studies from 1937 to 1951, Haitian scenes of the 1950s and 1960s, and the works of the past several decades that reflect a return to African themes. Her formal artistic career began in 1930 when she joined the faculty at Howard University. The racial discrimination that she experienced in Boston and North Carolina, as well as the climate and aftermath of the Harlem Renaissance, motivated the depiction of African and African-American themes in Jones’s early paintings. She became associated with the Harmon Foundation shortly after moving to Washington, and was a frequent participant in its exhibitions during the 1930s.

In 1937 Jones received a General Education Board Foreign Fellowship to study in France. She went to Paris in 1937 where she studied painting at the Académie Julian, lived among the French, learned to speak French fluently, and painted views of Paris and surrounding areas. Since her first trip to France, Jones has felt a spiritual affinity for the French people and their nation. She explains that France provided her with the first feeling of absolute freedom to live and eatwherever she chose. Her admiration for France and its people was so profound that she returned to Paris each year, except during World War II, for more than twenty years after her first trip. In 1952, a book of more than one hundred reproductions of her French paintings, Lois Mailou Jones Peintures 1937–1951, was published in Paris. Jones was the only African-American female painter of the 1930s and 1940s to achieve fame abroad, and the earliest whose subjects extend beyond the realm of portraiture.

Jones’s third period was also formed outside the United States in Haiti where she discovered a second spiritual home. She first went to the capital, Port-au-Prince, in 1954 when the Haitian government invited her to visit and paint the country’s landscape and its people. The trip lasted ten weeks and in that time Jones developed a love for Haiti’s warm climate, its beautiful scenery, and its colorful, deeply religious people. She also conducted painting classes at the Centre d’Art and the Foyer des Artes Plastiques. In recognition, the government of Haiti made her a chevalier of the National Order of Honor and Merit.

Haiti acquired even more meaning for Jones following her marriage to Louis Vergniaud Pierre-Noel, a prominent Haitian artist. Jones and Pierre-Noel first met in 1934 when they were graduate students at Columbia University. For almost twenty years they corresponded before they eventually married in the south of France in 1953. Jones and her husband lived in Washington, D.C., Martha’s Vineyard, and in Pierre-Noel’s hometown, Port-au-Prince. They had no children. His death in 1982 ended their twenty-nine year marriage.

Jones’s numerous oils and watercolors inspired by Haiti are probably her most widely known works. In them her affinity for bright colors, her understanding of Cubism’s basic principles, and her search for a distinctly personal style reached an apogee.

Jones’s return to African themes in her work of the past several decades coincided with the black expressionistic movement in the United States during the 1960s. Skillfully integrating aspects of African masks, figures, and textiles into her vibrant paintings, Jones continues to produce exciting new works at an astonishing rate of speed, even in her late eighties.

In 1945 James Lane, curator of painting at the National Gallery of Art in Washington, said of Jones's work, God's gift to Lois Jones is a beautiful sense of color. Like a singer who always sings true, this well-trained painter—and she has studied under Philip Hale, Jonas Lie, and the Académie Julian— shows true harmony in her oils. But that is not God's only gift: He has given her a sense of structure and design (which she uses in her textile patterns) that carries the color to victory, for unorganized color alone could not possibly do the trick. Her work, from her earliest still lifes and her prize-winning portrait French Mother, has, one sees, been responsive to light and the joyousness of light, but where the fine cityscapes of her Paris period were charming and gray, the landscapes, the portraits, and the still lifes from Martha's Vineyard are clarion and colorful. It is all, in the best sense of the word, happy art." It is extraordinary that nearly fifty years later, Jones's paintings, currently inspired by African themes, are still highly reflective of Lane's description.