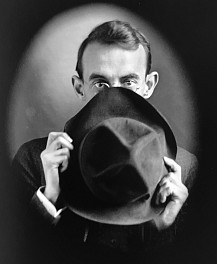 Self-taught photographer Hugh Mangum was born in 1877 in the newly incorporated, tobacco-fueled boomtown of Durham, NC. As an itinerant portraitist working primarily in North Carolina and Virginia in the shadow of the segregationist laws of the Jim Crow era, Mangum welcomed into his temporary studios a clientele that was both racially and economically diverse. After his death at the age of 44 in 1922, his glass plate negatives remained stored, out of sight, in a tobacco barn on his family farm for 50 years. Slated for demolition in the 1970s, the barn was saved at the last moment, and with it, this surprising and unparalleled document of life at the turn of the 20th century, a turbulent time in the history of the American South.

Mangum began his professional life as an itinerant photographer. He pitched his tent in town after town, photographing people of all colors and walks of life at prices that allowed even the most humble to afford his services. To economize, Mangum partitioned his negatives, allowing the images of multiple subjects to be recorded on a single sheet of glass. Citizens who could not drink at the same water fountain as their neighbors, are here seated side by side, fulfilling momentarily the peaceful aspirations of gospel songs so well known in the day. Mangum provided an opening for the dignity of every individual to shine. His welcoming approach allowed sitters to express themselves as they wished, devoid of the grotesque racial characterizations so common in his lifetime. One hundred years later we are privileged to experience the dreams of a time perhaps not so distant as we may think.