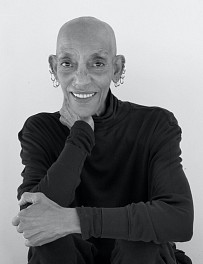 Aminah Robinson is an instrument of memory, gathering stories, totems and fragments of the past to bring into the present and pass on to the future. Her art grows from her belief in the African concept of Sankofa, an understanding of the past so that we can learn from its richness, joys and mistakes. The materials for her drawings, paintings, sculptures and artist books are the materials of memory, often her own but also of others: buttons and cloth like those used by her mother; an amalgam her father called “Hogmawg” composed of animal grease, mud, glue, twigs, clay and other bits of everyday life; and discarded scraps from the lives of friends, neighbors and family. As these materials pass through Aminah Robinson’s hands, they recombine into an art of extraordinary power.

Born Brenda Lynn Robinson in 1940, she grew up in a close-knit community in Columbus, Ohio, where family and neighbors shared life and stories. Among the most influential storytellers in Robinson’s childhood was her elderly great-aunt Cordelia who had been born into slavery in Georgia. Cordelia knew the brutal lore of the Middle Passage from Africa and the experience of life as a slave. These stories were a continual influence on her work.

Aminah Robinson’s parents encouraged their daughter’s noticeable artistic talent. She attended Columbus Art School (now Columbus College of Art and Design) on Saturdays while still in high school, and after high school she continued her studies there. In 1958, while still attending Columbus Art School, Aminah Robinson worked at the city’s public library, where she took the opportunity to read the history of Columbus’ African American neighborhoods. These readings not only enriched her growing cache of stories, they prepared her for the struggles in the growing movement for African American civil rights. In 1963, Aminah Robinson joined with over two-hundred and fifty thousand other marchers for the historic March on Washington where Martin Luther King, Jr.’s “I Have a Dream” speech became permanently etched into the American consciousness.

After marriage, the birth of her son, the subsequent dissolution of marriage and jobs as an illustrator in Idaho and Mississippi, Aminah Robinson returned to Columbus in 1971 to seriously pursue her art. To make ends meet, she worked as an art instructor for the Beatty Recreation Center. But critical notice of her work began to come her way, and in 1979 the Ohio Arts Council awarded her a grant that enabled her to travel to Africa to observe the continent’s cultures and study the sites of the slave trade. It was during this trip when Brenda Lynn Robinson became Aminah Brenda Lynn Robinson; the crowning name, meaning faithful, bestowed on her by a religious leader in Egypt.

Aminah Robinson returned to Columbus and her job at the recreation center, where she remained until 1990. By then, her artwork was providing enough income to pursue an artist’s life full time.

Among the grants that enabled this transition was an award from the Ohio Arts Council to fund a residency at the Museum of Modern Art’s P.S. 1, and a National Endowment for the Arts Fellowship, both in 1989. Exhibitions in galleries and museums followed, as did extended travel to New York City, Israel, Chile, Sapelo Island, Georgia, where her ancestors had been slaves, and again through Africa. Each trip resulted in a series of artworks based on Robinson’s observations, emotions and each culture’s lore of stories.

Aminah Robinson is now esteemed as a vital contributor to American art. Her work is actively collected and is represented in the Columbus Museum of Art, the Brooklyn Museum, the Newark Museum, among others. In 2002, Robinson was awarded an honorary Doctorate from Ohio Dominion University. In 2003, she was commissioned to create a monumental work for the National Underground Railroad Freedom Center in Cincinnati, which she completed in 2004. Also in 2004, Robinson was honored with a MacArthur Foundation Genius Grant, one of the highest honors awarded to the creative professions. In 2006, the Columbus Museum of Art organized a major retrospective, Symphonic Poem: The Art of Aminah Brenda Lynn Robinson. The exhibition traveled to the Brooklyn Museum, the Tacoma Art Museum and other venues across the country, and was accompanied by a 204 page book published by Abrams.